A Noob’s Guide to CRISPR

Imagine being able to eliminate cancer cells from a patient’s body altogether, or grooming bigger cows that give you double the meat (or milk). Imagine curing blindness. Thanks to the CRISPR revolution, all this and more, is now possible.

The first connection to what can be now termed and considered as CRISPR originated in Osaka University in Japan in 1987 and was a very fortunate accident. CRISPR was cloned accidentally with the iap gene. In 2007 the first experimental evidence was finally published and it was used medically, paving the way for what we now call a revolution.

CRISPR is an acronym for Clustered Regularly Interspaced Short Palindromic Repeats, and is a genomic tool that has been discovered in it’s full potential not too long ago. Biotechnologists believe this tool could create a revolution on genetic modification and gene editing. Apart from its deep-based uses, it is also inexpensive, economic, brisk and not very difficult to use – allowing biotechnologists to simply ‘cut’ genes with very high precision. Result? We get to remove what we don’t like, and enhance what we do. Think designer babies.

Cas is an acronym for CRISPR Associated Sequence. These two areas are adjacent to each other on the genome. CRISPR and the Cas work together and are expressed together as well, due to their proximity on the physical level. The Cas proteins are numbered as Cas1, Cas2 and so on. Some of them have complex purposes – such as attacking the growing DNA to incorporate it into the CRISPR area. This regular incorporation helps curb bacterial cells and destroys them if they attempt to turn up recurring times. However, what we’re dealing with here is much more revolutionary and powerful than just a virus-wrecking structure. It is now predominantly used as a method for genetic editing.

Due to it’s inexpensive and easy and quick to use nature, it is widely used by labs. It is a lot of power that has been bestowed on upon biologists. As Senior System Biologist of Stanford University, California has rightly said “The power is so easily accessible by labs – you don’t need a very expensive piece of equipment and people don’t need to get many years of training to do this. We should think carefully about how we are going to use this power”. For that matter, we have already rampantly started using this power given onto us.

From 2011 onwards, interest in CRISPR has only been growing and as of 2014, a research revolution has engulfed this tool. With 1300+ Publications mentioning CRISPR/Cas, 150+ Patents mentioning CRISPR/Cas and 80+ focus projects with a funding of over 160 million dollars, clearly an unprecedented amount of potential has been seen in CRISPR. 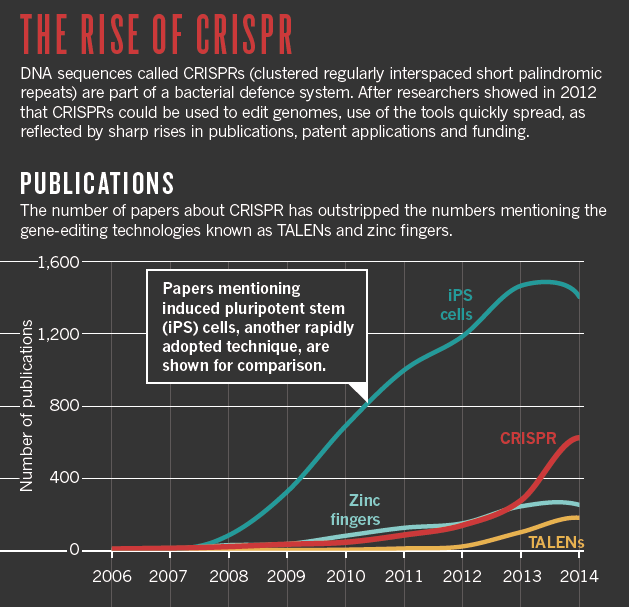 How does CRISPR work?

The CRISPR/Cas9 System consists of two fundamental molecules that introduce the desired change into the DNA. The CRISPR sequences are rewritten onto a brief RNA sequence. They try to find out any matching sequences of the DNA. When finally a certain match on the DNA is found, Cas9, the enzyme produced by CRISPR binds itself to the DNA and chops the targeted DNA to introduce the new bits of DNA. Recently, researchers have begun using activated genes to study the gene’s function.

We also have a guide RNA that has a 20 base long sequence located within the larger RNA area. This binds the RNA sequence to the DNA and is necessary to ensure that the cas9 enzyme cuts the genome at the right point. The guide RNA will only bind itself to the target sequence in the genome only.

Several Medical Breakthroughs have already been achieved through CRISPR and many more are still being tried and tested out with optimistic expectations.

We can also make buffed up goats and cows using the same technology. This offers wide ranging benefits to to cattlemen or people who engage in animal husbandry. Buffed up animals mean more meat from them and a greater amount of milk from the cows. Chinese scientists used it to delete the genes that stop their muscle and hair growth in goats. This has successfully expanded China’s commercial meat and wool industries alongside the livestock and agriculture industries

The Harvard Medical School too recently decided to use this tool for a life saving experiment. The complex CRISPR model was used to edit 62 genes in a pig cell, making its organs suitable to human transplant.

We’re also seeing applications on the treatment of HIV as well. CRISPR can get rid of the virus’ DNA from the patient’s genome. The biggest challenge for HIV patients however, has always been to locate HIV DNA in the dormant cells.

With the onset of the CRISPR revolution, biologists have also come up with the idea and propagated the idea of super plants. Researchers have experimented to find a way to improve crop disease resistance and stress tolerance. A team of researchers from Rutgers University, New Jersey have found a way to genetically modify wine grapes and turf grass so that this can be implemented in a variety of other crops as well. The grapes will be modified so that they can withstand fluffy and feathery fungus. Scientist are working harder to provide new stronger and heartier crops to supplement the agricultural industry.

CRISPR can even be used to treat and cure blindness. So far, the mutation has been tested on lab mice. Retinitis pigmentosa, a disease that ultimately leads to blindness was successfully removed from mice. A single injection of CRISPR gave their eyesight better clarity and view than a control group. Similar techniques on humans are in the pipeline.

CRISPR/Cas is the newest kid on the block, the revolutionary superpower, a tool every biologist is carefully treating as his own child. It is powerful, quick and not surprisingly, having to face resistance from quarters anxious about its potential. It’s ability to rewrite the helix and allow human species to make self directed genetic leaps has drawn a mix of confusion on the form of devotees and detractors.

It’s true – CRISPR does not come without its share of downsides. A relatively small (but nonsignificant) portion of the time, the nucleotides that guide the CRISPR/Cas complex into position on the target DNA, end up binding to a sequence that they don’t actually complement. So you get an insertion at a place in the genome that you didn’t want. It’s rare enough so you can use it to make desired mutants from research animals, but it is also higher than our tolerance level when treating humans with it. You don’t want to edit a living person’s genome to cure a disease and cause something like cancer. Off target sequences caused during replacement sequences are possible and they may well cause an undesired effect. CRISPR is getting better and continues to evolve from its experimental stage – but that’s what it is right now – experimental. The same test on repetition may give different outcomes – so there’s still a good amount of research we need to conduct here.

CRISPR has rapidly caught the attention of the global media and several corporate biotech firms. A major fear of most scientists is the industrialisation of the technique before we have a good and steady hold over it.

Despite all the hesitation on CRISPR, the tool has been incredibly promising and research and applications regarding it have too been flourishing well. Multiple firms have already begun commercialization. Like it or not, CRISPR is going to enjoy celebrity status in the industry in the near future at the very least.