As of 2013 , there are more than 170 million objects smaller than 1 cm in orbit around our planet. About 670,000 objects range between 1 to 10 cm, while about 29,000 larger debris are also circling the Earth. That’s a lot of space junk. Fortunately, space is big. Or so we’ve thought. Soon, space junk will be a bigger problem that’ll need urgent solutions.

Space junk includes space debris, junk, and waste, litter of defunct manmade objects in space (old satellites, spent rocket stages, and fragments from disintegration, erosion and collisions – including those caused by debris itself). During the 1970s and 1980s, the Soviet Union launched a number of naval surveillance satellites as part of its RORSAT (Radar Ocean Reconnaissance Satellite) program. The satellites, which were equipped with a BES-5 nuclear reactor to power their radar systems were normally boosted into a medium-altitude graveyard orbit. But several failures resulted in radioactive material reaching the ground or water. Satellites which were disposed of had an estimate 8% chance of puncture and coolant release over a 50-year period. The coolant freezes into droplets of solid sodium-potassium alloy, forming dreadful other debris. 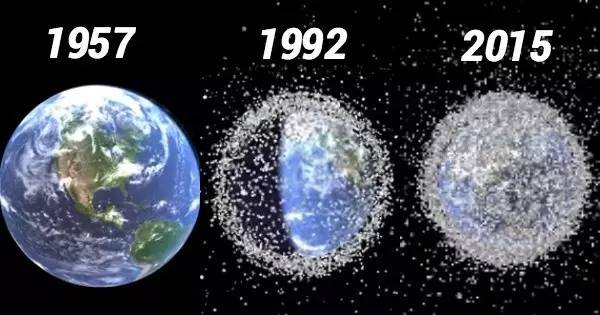 Space junk accumulation has happened due to a variety of reasons.

There are a few ‘universal orbits’ which keep spacecraft in particular rings. These are types of Low Earth Orbits. The closest are sun-synchronous orbits that keep a constant angle between the sun and the orbital plane. They cross over the Polar Regions. Orbits are further changed by perturbations (which in LEO include unevenness of the Earth’s gravitational field); hence collisions can occur from any direction.

At higher altitudes, where air drag is less significant, orbital decay takes longer. Slight atmospheric drag, lunar perturbations, Earth’s gravity perturbations, solar wind and solar wind and solar radiation pressure can gradually bring debris down to lower altitudes (where it decays). Such is the example of the dead spacecraft Vanguard I launched into Medium Earth Orbit (MEO). As of October 2009, it is the oldest man-made object still in orbit. Some more engrossing space debris include

But the threats are even alarming. Although spacecraft’s are protected by Whipple shields, solar panels, which are exposed to the sun, wear from low-mass impacts; these produce a cloud of plasma which is an electrical risk to the panels. Larger debris usually destroys a spacecraft. The earliest suspected loss was of Kosmos 1275, which disappeared on 24 July 1981, a month after launch.

Kosmos contained no volatile propellant, but a battery explosion is also a possible cause. Tracking showed it broke up into 300 new objects. Several impacts were confirmed since. Olympus-1 was struck by a meteoroid on 11 August 1993, and left adrift. On 24th July, 1996, the French microsatellite Cerise was hit by fragments of an Ariane-1 H-10 upper-stage booster which exploded in November 1986. On 29 March 2006, the Russian Express AM11 communications satellite was struck by an unknown object and rendered inoperable.

Here are a few instances when space debris reached the earth’s surface:

The threats and the chances of accidents are accretionary. Several companies and entities have proposed ways to get rid of derelict satellites and other space junk. The most exciting of which are:

The European Space Agency’s ‘e.DeOrbit mission’, first proposed publicly in early 2014, involved seeking out satellite debris in a polar orbit at an altitude between 800 and 1000 kms. The plan was to pick up debris using ‘capture mechanisms’ such as harpoons, robotic arms and tentacles.

#2 – Pushing debris out of space

Clean Space One is a technology demonstration spacecraft which is expected to launch in 2018 from the back of a modified Airbus A300 jumbo jet. The Swiss Space systems satellite would then meet up with a decommissioned Swiss Cube nano-satellite to move it out of orbit.

The Japanese Aerospace Exploration Agency proposes to slow down the speed of satellites or space debris, using the current of an electrodynamic tether. Slowing the satellite speed would make it gradually fall closer to earth, where it will burn up.

Texas A&M University has proposed the Sling-Sat Space Sweeper – a swinging capture of a space debris. The sweeper works by swinging towards the earth’s atmosphere and then using the momentum to sail on to the next piece of space debris for removal.

Unless tackled, the space junk issue is expected to blow to proportions it’ll be hard to come back from. More delays are likely to mean increased costs in cleaning up our space backyard, and a halt to space exploration. The Virtual Reality industry would probably like that though.