Time Dilation: Our Satellites Are Traveling Through Time

Relativity is more than a hundred years old. The year 2015 was the International Year of Light. The title isn’t exaggerated focus – Relativity effects our daily life in fundamental ways. Einstein’s Relativity theory essentially tells us that all our satellites in outer space are travelling through time. The proper term for this is time dilation. If not kept in check, the satellites would basically travel to the future, technically.

Let’s focus on navigational satellites (popularly, but incorrectly referred to as ‘GPS’). The Global Navigation Satellite System is possible because of Relativity. In other words, the theory is why GPS or GLONASS always provide spot-on location.

What is the Global Navigation Satellite System?

The Medium Earth Orbit (MEO) satellites of GNSS orbit at an attitude of 20,000km from sea level, and have an orbital velocity around 10,000 km/h.

Relativity is vital for satellites

Here’s how a GPS satellite works. An electronic receiver communicates with a navigational satellite to determine an accurate position, speed and direction. This precision is only possible if the clock ticks in the satellite are accurate up to 30 nanoseconds. Apart from this, the atomic timepieces in the satellites should synchronize with the timepieces on the ground. As these satellites are always in motion relative to people on Earth, Relativity comes into play. Here’s when Relativity decides to mess with our satellites.

According to General Relativity, the timepieces under the influence of increased gravity should tick faster when compared to other timepieces. Along with this, the relative motion of the satellites will make a person on Earth see that the clock on the satellite ticks quicker when associated with a timepiece on Earth.

Confused? Let us consider a situation from a very popular and a very stimulating film – Interstellar. People under the influence of Gargantua’s (the gentle black hole in the movie) gravitational field age far less (time moves slow) when compared with other people who are not under the influence of Gargantua (In fact, Matthew McConaughey and Anne Hathaway rarely age). Gravity distorts space-time. Roughly speaking, it causes a time-lapse or time dilation. 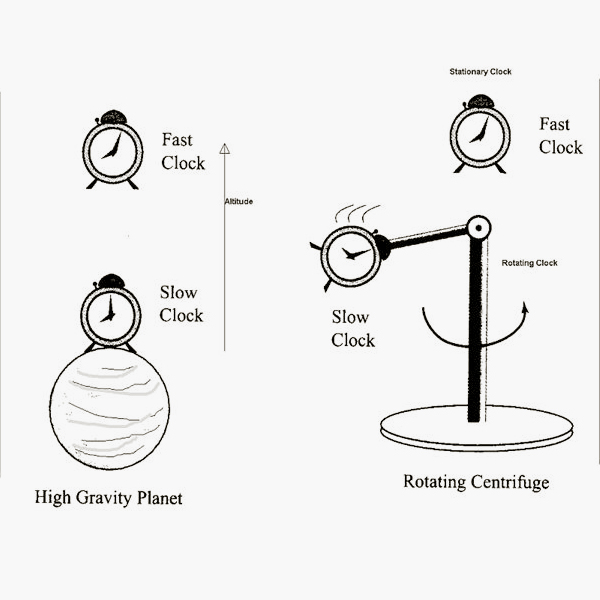 Special Relativity predicts that timepieces in objects moving at a high velocities tick faster when compared to objects moving at low velocities. Which means as we get to the speed of light, massive time dilation should occur. Satellites don’t travel anywhere that fast, of course. But because of the relative motion of the satellites, the timepieces on the satellite should tick seven microseconds slower (Special Relativity). Bearing in mind both the effects, the final difference will be around 39 microseconds. It may not seem much – but when you’re dealing with such high precision science, at fairly high velocities and altitudes, it adds up to be significant.

How Relativity saves our satellites from time dilation

Taking into account this difference, the location fix of a GNSS would be false after only two minutes. These relativistic effects accumulate and could show enormous errors in positioning. If you choose to ignore these relativistic effects, your navigation system would display that you are at a different place each time, even if you are standing in your house lawn every day.

To counter these effects of time dilation, you should slow down the atomic timepieces on these satellites before launch. Well, you cannot slow down an atomic clock. No one can. You can counterbalance your second though, meaning, you change the international definition of the one-second interval. You change the amount of atomic alternations that make a one-second interval. After arriving at the respective orbit, these timepieces on the satellites would seem to tick at the same rate as of atomic timepieces on Earth. Moreover, each electronic receiver has a built-in microprocessor to perform crucial relativistic calculations.

Relativity works on humans too. Astronauts onboard the ISS also experience time dilation because of their altitude and velocity. The effect is small, however. They only gain 1 second over a 140 year period.

Bottom-line: Relativity is not some scientific theory only useful to physicists. Einstein’s theory runs our world.