Is this life real?

Is our life real? Are we truly living? Or are we just segments of computer code? Wake up Neo.

There’s isn’t just one answer to this. In fact, we currently do not have a perfect answer. Physicists are engaged in a deep debate on the nature of our reality, with strong arguments supporting the notion that our universe may be a simulated. If this is true, the next big question is – why?

Is Life a Simulation?

Is there a way to find out? According to the brain in a vat scenario, our minds cannot tell if we’re perceiving a simulated reality. The brain receives all its impulses in the skull. If it were extracted/born into a jar with computers giving it the same impulses, there’d be no change in your perception. However, we can still look for clues in the reality we’re inhabiting to actually find out.

The most bizarre rationale for this could be that our future generations (or descendants) are studying human evolution (if you can’t travel through time, you might as well recreate it in computers) and us by actually creating an 11 dimensional universe (11 dimensions courtesy: M-theory). It isn’t a preposterous notion. Bostrom’s paper focuses primarily on this simple, yet mind-boggling idea. Other researchers – Silas R. Beane, Zohreh Davoudi, and Martin J. Savage have also submitted a scientific paper on this topic.

Also read: The Fermi Paradox – Are Aliens Watching Us?

Enrico Fermi put forward the very famous Fermi Paradox, in direct disagreement with the Drake equation. According to the paradox, the universe has an abundance of intelligent civilizations, especially given its age size. So why aren’t they here yet? Potential solutions range from limitations such as the cosmic speed limit, to predatory alien races. But computers (and therefore, simulations) figure in more than just one solution. Maybe biology is simply one of the multiple phases of life, just as unicellular life was? Maybe, after a certain point, all civilizations ‘go digital’ – they upload their consciousness to computers, and cease to be interested in the cosmos, thus never venturing out of their home planet (or solar system).

Or, there is this more interesting solution – sufficiently advanced civilisations always end up dead, somehow. It’s not a solution you can rule out – we humans ourselves, at this very moment, possess enough nuclear arsenal to wipe out the planet.

Let’s assume all civilizations attain a significant level of advancement before they kill themselves. A decade ago, smartphone industry barely existed. Two decades ago, the internet was still trying to go mainstream. Now, the iPhone 6 is 120 million times faster than the Apollo moon mission computers. Our best supercomputers can simulate large parts of galaxies. They take months to run the simulations, but they pretty much do it. Pretty evidently – technology advances at exponential rates. By the end of this half century, humans are expected to have built computers (complete with advanced Artificial Intelligence) to simulate the human brain itself. 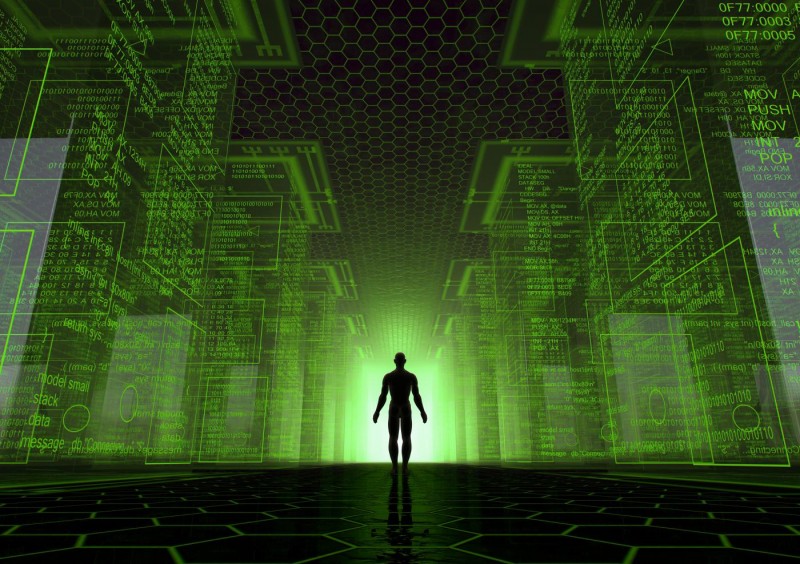 Let’s base our assumptions on this rate of advancement. In about a century – we’d probably have enough computing power to simulate multiple organisms of varying intelligence. Even at a conservative rate – we’d most likely have enough computing power to simulate large ecosystems within another century. Throw in a couple more decades, and we’d simulate the Earth, in its entirety. A century more perhaps, and we’d be simulating galaxies, even a universe?

So what if it’s happened already, and we’re the simulation?

This hypothesis can neatly explain Fermi’s Paradox. We may be part of some simulation running in a research lab. The first of its kind, perhaps. Or, we’re one of million other simulations running on computers belonging to an advanced civilization’s equivalent of a schoolboy. The latter scenario, is much more likely. Here’s why:

Our Universe is too perfect

Dark matter has puzzled both physicists and science enthusiasts for over a decade. Dark Matter is what we point to for the Universe’s unexplained mass. You cannot see dark matter but you feel its impressions. Built on the standard model of cosmology, the entire mass–energy of the identified universe includes 26.8% dark matter, 68.3% dark energy and only 4.9% ordinary matter (atoms). 95.1% of the universe is invisible. If you only believe what you see, the only answer to this absurdity is digital simulation.

Space-time bends or expands because of dark energy. In non-technical language, the Dark energy is the energy of vacuum and is the reason as to why the universe expands. Abandon all your school education about vacuum. It is not an empty space.

This extremely weak force (magnitude of force is based on calculations of quantum physics) is the basis as to why the universe is expanding and not contracting. Why did I bring dark energy here? Well, the amount of dark energy present is the ambiguity here. A little too much of dark energy and we would never see stars in the night sky and too less dark energy would mean no universe. The precise balance between dark energy, dark matter, and ordinary matter has led to the greatest coincidence of all time – the existence of our universe. In a parallel universe, this may not be the case. It all looks like a perfect synthesis based on numerous trials that may have failed on computer programs. There is too simply too much good luck involved in our current model of the universe.

At the same time, there are sound arguments against the idea of our lives being a simulation.

Data takes up memory. Everything on storage devices – from random segments of code to firmware that runs that code, needs to be stored somewhere, in bits. These things need storage space. And there’s only a finite amount of storage space, for even the most advanced computers.

In that case, any computer simulation should have a start and an end, or it’s running in a loop. Consider the case of π, or any other irrational number. They do not end, neither do they form any sort of pattern. How would a computer ever have enough storage space to store the value of any irrational number then?

Life is indeed a simulation

The smallest unit of a computer display – is a pixel. Pixels are what come together on your machine, your smartphone, or any other electronic device. You can’t divide a pixel, just like how the atom was considered indivisible for a long time. There is in fact, a real life equivalent of our pixel. It’s called Planck length. Measured at 1.6 x 10-35 meters, it is the smallest possible measurable length in the universe. Beyond this, dimensions don’t exist. Is this proof of our simulation’s existence?

You could even argue that the simulation may have codes or fragments unsolved for and we will eventually find them. Space-time may be looping on itself so that these fragments are never visible. Alternatively, the program could be too good, we can never find anomalies, and there are no Easter eggs up for grabs.

Possibly, π has an end and we are just too primitive to find out. This simulation may loop the value into continuous randomness at some point.

Scientists are building super computers to understand the behavior of quarks (fundamental constituent of matter). This field of study is Lattice quantum chromodynamics. This states that the atoms or molecules obey fixed laws in a dimensional system. We can use the same experiments to generate and simulate micro universes, though the largest size possible would be the size of an atomic nucleus. If the generated micro-universe is stable, the universe isn’t a boundless continuum as proposed by Albert Einstein. Just like a computer program, the universe runs on predetermined commands.

Bottom-line: There is no definite right answer. No way to disprove the simulation theory. Just like The Matrix, though, there is choice. Take the red pill, and believe in the digital simulation. Or choose the blue pill and believe that we are ‘actually’ living.