Where Does All The Nuclear Waste Go?

Since the start of the industrial revolution our main source of energy has been fossil fuels – coal, petroleum and natural gas.  But with the rising issues that arose with their usage, the world has been shifting stance. Over 441 nuclear reactors are currently running in about 31 countries and they account for 11% of the world’s electricity production.

Related: Solar vs Nuclear – What energy future are we headed for?

Nuclear power plants do not release any direct harmful emissions. Yet – they generate one of the most noxious form of waste that may require millions of years for degradation. Nuclear waste is simply the left-over mass of radioactive materials in a reactor where energy is extracted from nuclear fuels. They are often broadly classified into ‘low level waste’ and ‘high level waste’ based on their radioactivity level and longevity. High level waste, which is generated in a much lesser quantity is our main concern as it contains highly radioactive materials that decay with a high longevity – more than 10,000 years. It is estimated that around 20 metric tons of nuclear waste is produced in a year by a typical nuclear power plant. So, how are we dealing with all this waste? 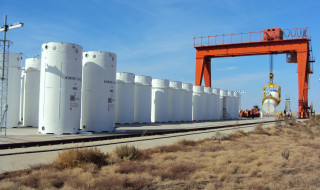 Low level waste is being disposed in several suitable ways: it is being sealed in containers and stored in secluded open sufaces or buried until it poses no threat of radiation, afterwhich it can be discarded as normal wastes. However, we still do not have a proper solution for the disposal of high level waste – so we are still just storing them in temporary units. We have safe storage units such as the ‘Spent fuel pool’ and ‘Dry cask storage’. The radioactive waste here is concealed in steel cylinders. In spent fuel pools, the cylinders are being kept at about 20 feet under water in specially designed pools were they remain for several years till their radioactivity is minimised. The dry cask storage system stores the waste cylinder surrounded by inert gases inside a concrete cask and is used only after nuclear waste has spent at least a year in the spent fuel pool.

The above methods are internationally accepted but we must remember that they are not meant for permanent storage. Some radioactive waste had been stored in this manner for multiple decades. This entire process operates with a very big risk of radiation leakage, so the waste is stored in isolated places far away from the public. These storage units actually seem to be reliable but they require so much supervision and they can never keep up with the rising nuclear wastes. We need something better, something permanent yet safe.

Multiple countries are working together to come up with a new way to manage their nuclear waste. We have several methods that are being worked on such as deep geological repository, transmutation, ocean floor disposal, space disposal, rock-melting, disposal in ice sheets, and disposal at subduction zones and a few more. However, many of these are found unsuitable due to inefficiency and other management issues. The most promising method so far is the ‘deep geological repository’ where the nuclear wastes will be stored in safe containers between ancient impenetrable rocks deep inside the earth.  We have many countries currently working on this – they include Yucca Mountain depository in USA and Onkalo site in Finland. You may wonder why ‘space disposal’ is not considered a workable method. It is mainly due to economical matters for now, but many scientists are still examining this method. The other methods are also with their own issues realated to safety and inefficiency.

The main aim here is to dispose off the waste in a once-and-for-all fashion, to avoid repeated management.

Are we playing safe?

Many people still debate the safety of relying on nuclear power itself, not just the radioactive waste they generate. Most international organisations seem to be quite confident on the way we are handling nuclear power and its waste inspite of the bitter protests that often come about. In fact, they are actively developing technologies for the progress of our nuclear power. The World Nuclear Organisation, an eminent international organisation, claims that “the past five decades of our civil nuclear power experience has not seen much serious health or environmental problems” compared to the tragedies that we have been facing with fossil fuels. Nuclear energy remains the best alternative power source we have to replace fossil fuels as of now.

We need to renovate our nuclear waste disposal methods and develop a system that can deliver us more assurance. Burying the nuclear wastes deep inside the Earth may save us from the radiation leakage, but is unlikely that radioactive waste can be shut out completely without any visible side effect.