The Impossible EmDrive May Almost Be Here

There are a lot of revolutionary discoveries a scientist may dream of. Finding the cure for cancer, inventing a device to read human and animal thoughts alike, building a time machine (never mind the physics limitations) and so on and so forth. One among this never-ending list is to shorten the span of space travel and make interstellar voyages a reality. On 19th November 2016, NASA published a peer-reviewed paper vindicating the possibility of the EmDrive, sending shockwaves in the science community.

Then, on 10th December, China proclaimed that it has successfully tested the device, only intensifying the cacophony surrounding it. First ushered in my Roger Shawyer back in 1999, the EmDrive a.k.a Electromagnetic drive has made to the headlines owing to its supposed “impossibility”. 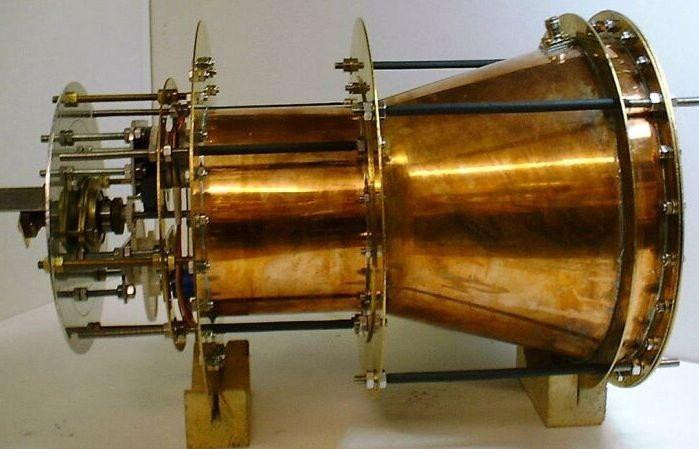 The EmDrive is a fuel-less propulsion engine that thrusts forth spacecrafts solely by bouncing electromagnetic radiations within a confined cone-shaped metal microwave vacuum chamber. In essence, no microwaves or anything else leaves the device, and so it is considered reactionless. But, typically, for a propulsion device to produce thrust, it has to eject a propellant in the other direction. EmDrive doesn’t comply with this. This way, the engine keenly violates the law of conservation of momentum which presupposes that generating a mechanical action is improbable sans exchanging matter. But, if it were to be realized, EmDrive spacecrafts can get humans to Mars within a span of 10 weeks.

The much controversial peer-reviewed paper “Measurement of Impulsive Thrust from a Closed Radio-Frequency Cavity in Vacuum” was published online in the American Institute of Aeronautics and Astronautics (AIAA)’s Journal of Propulsion and Power on 19th November. It illustrated a series of successful tests carried out by scientists at NASA’s Eagleworks Laboratories. The tests showed that the drive produces 1.2 millinewtons per kilowatt of thrust in a vacuum. To make it functional, they need to bring up the levels between 100 millinewtons and 1 newton.

The director of CAST (China Academy of Space Technology) Dr. Chang Yue announced on 10th December that EmDrive have successfully passed all the tests in the its laboratories. He added that testing in zero gravity in low earth orbit is underway in the Tiangong-2 space station passing through the last stages of the feasibility study phase. The researchers of CAST have corroborated that NASA’s results, only reaffirming what they have already accomplished. They have made claims stating that the Chinese government has been bankrolling its technology since 2010.

Also read: Why can’t we have electric rockets?

What can the EmDrive do?

It boasts a myriad of ambitious applications if brought to reality. Interplanetary missions beyond the asteroid belt, ridding the mass occupied by fuel in manned space crafts, creation of long lasting surveillance satellites. Also, crewed missions to far off planets like Titan or Enceladus situated in Saturn’s orbit. The duration of a return trip to Titan would be just 32 months. Another potential candidate for this sort of a mission includes Alpha Centauri system, our closest star system, located at 4.3 light years distance.

As a reaction to the official publication of the NASA research paper last month, many in the science field have rejected the results citing the presence of presumed experimental errors. It has been brought into skepticism owing to its transgression of Newton’s third law. Newton’s third law states that “for every action there is an equal and opposite reaction”. Considering the slim possibility of success, experts look forward to investigate the matter. Significantly, the functioning of EmDrive would mean rewriting the fundamental understanding of physics. Simultaneously, it’ll mean falsifying some of the time tested laws of science.

In the other receptacle of reactions, scientists have attempted to reason the occurrence by subscribing to several causative factors:

First, thermal expansion of the device. This phenomenon demonstrates that as electric currents heat components within the Drive, they consequentially expand during the experiments. This effects motion that would appear as a force.

Second, the Mach effect. It suggests that some of the force applied to an accelerating body of mass is preserved as potential energy in its body rather than generating kinetic energy. This causes fluctuations in the object’s resting mass. This phenomenon could be the reason for creation of the type of thrust witnessed in the experiments.

Third, the quantum vacuum theory. It is based on the premise that any arrangement of microwaves inside an enclosed cavity cannot produce thrust. If the microwaves cannot push against inside walls in the copper cone to generate thrust, then they must be pushing off something virtual in within the cone. In this case, virtual particle pairs. This has led to the postulation of the quantum vacuum theory. Thus, the EmDrive may generate thrust by acting on virtual particle pairs that are in turn generated by fluctuations in quantum vacuum. These fluctuations are created by the electromagnetic field generated by the EmDrive. The microwaves push off these virtual particles within EmDrive cavity so as to generate thrust. Not all scientists concur this theory.

Additionally, two new phenomena have been proposed to state that no law of physics is being refuted by this “reactionless” device. EmDrive attests the new theory of inertia that speaks of Unruh radiation. Unruh radiation is a form of heat experienced by accelerating objects. Based on this, since the wide and narrow ends of the EmDrive’s cone allow different wavelengths of Unruh radiation, the inertia of the photons inside the cavity change as they bounce back and forth which produces thrust in order to conserve momentum.

But, this fails to hold water as the presence of such radiation hasn’t been experimentally confirmed. The positing of variation of the speed of light within the EmDrive’s cavity capsizes the alleged presence of this radiation, as it clearly violates Einstein’s theory of special relativity. Second, the EmDrive does, as a matter of fact, produce exhaust that is light. Photons pair up with another out-of-phase photon in order to shoot out of the metal cavity. This, creates force. The researchers reason no detection of such thrust has been made within the radar because photons need to pair up with an out-of-phase photons as noted earlier in to escape the cavity underling the fact that they completely cancel each other out.

This is not the end

Arguments and counter-arguments are not new to Science. But, allowing the possible skewing of the picture of universe we have drawn up hitherto to justify the possibility of such a device is new. Only further research and fool-proof testing can clearly presage the future of science and universe as we know of.