The Hyperloop will Revolutionise Transporation

Big ideas that are aesthetically pleasing and tickle people’s intellectual sensibilities, while instilling a sense of wonder at the same time, are not something we come across every day. When they are brought forth, they are first received with sneers, inhibitions, and great amounts of disbelief. This is generally the chain of events that occur before the materialization of an abstract premise. Elon Musk’s idea of a high speed pneumatic transport system, called the Hyperloop was no exception.

When the billionaire isn’t busy trying to colonize Mars or getting rid of fossil fuel consumption, he finds time to revolutionise the transportation sector. The Hyperloop, is Elon Musk’s brainchild. 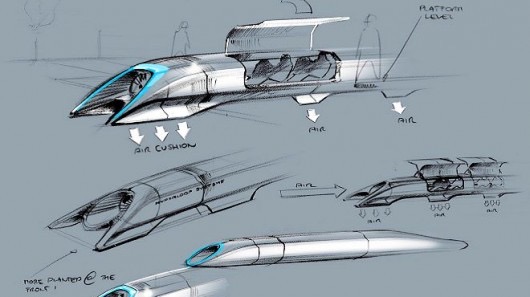 Musk first conceptualized and talked about the Hyperloop in 2013. It is now encapsulated in a 57-page white paper document. What it entails are carefully divulged points of the basic technical aspect of the idea. I would quote Elon Musk here who says that the Hyperloop is ‘’a cross between a Concorde, a rail gun, and an air hockey table.” The Hyperloop can be thought of as a conceptual high-speed transportation system that can cover the 610 kilometers distance between San Francisco and Los Angeles in under 30 minutes. It’ll involve people sitting in perhaps transparent capsules, that zip through near vacuum tubes at an insane speed. Yes, this is stuff from the future.

To get a better idea of its speed, note that covering the 380 mile distance between LA and SF in 30 minutes gives us a speed of around Mach 0.91 – that’s almost the speed of sound in air! The average speed or an aircraft covering a 337 mile distance between the two points in the estimated period of one hour and 19 minutes roughs up to a speed of Mach 0.33. The Hyperloop therefore, is travelling at almost 3 times the speed of an aircraft.

Musk first introduced the concept as a ‘fifth mode of transport’ which would be characterized by the following features:

The idea was born out of a reaction to California’s proposed high-speed rail, which will traverse 220 miles in an hour and thus, reach San Francisco from Los Angeles in two and a half hours, which is apparently too slow. In fact, the California high speed rail is the slowest, and most expensive-per-mile, in the world. Not the adjectives you want to use with a high speed railway system, do you?

The Hyperloop on the other hand, will be crazy fast, thanks to magnets and fans to drive the aerodynamic aluminum pods through pressurized tubes.

If we were to describe the basic sketch-on-a-napkin idea, you’d be expected to visualize reduced-pressure tubes in which pressurized capsules ride on an air cushion that is driven by a combination of linear induction motors and air compressors. A succinct yet vivid description of the concept tells us that the presence of an elevated, reduced-pressure tube containing pressurized capsules as shown in the diagrams, driven within the tube by a number of linear electric motors will be the main impetus behind the transit marvel.

As the capsule would approach the ends, the velocity will be limited to less than about 300 miles per hour (480 km/h). In rugged terrains like the hills, where the Hyperloop would follow the Inter-state highways, the capsule speed can go up to 890 km/h. The longest segment of the route traversing through center of the state features the most gradual turns, and thus the capsule can attain speeds ranging up to 760 mph or 1,220 km/h. The third chunk of Elon Musk’s triad that has been compared to the Air Hockey Table are the air bearings upon which the capsules will ride with minimum friction. Air bearing on the air hockey tables is the small puck that slides around on the table. Pressurized air is released from a grid of small orifices and thus puck is lifted by this air. Air bearings lend a natural stability, long lifetime and low friction which is desirable for the Hyperloop.

The mere idea caused such excitement that the first startup to design this system known as Hyperloop Transportation Technologies (HTT) was set up in the year 2013. As the reports would claim, the firm has already crowdfunded its team of 170 which consists of majorly part-time engineers and designers. Another startup called Hyperloop One has been set up and is leading the Hyperloop Race. The swanky official webpage endorsing this idea of a revolutionary transit system may lure you into utmost wonder and you’d want to read further about it, but that it where it stops. The webpage says no more than the team is working every second to ‘’design, build and test every aspect of the world’s next transportation system’’ as quoted by the brains working on it.

How Hyperloop Will Change The World

Let’s put aside the numbers, figures and other technical details, and focus on Hyperloop’s core mission.

The Hyperloop is going to be travelling at the speed of sound, and get you across the breadth of large countries in double digit minutes. This kind of technology can literally change how we perceive the world. Once the Hyperloop has been replicated in multiple locations and has gone mainstream, neighbours won’t be just the people living next door. If you can get up in the morning and make it to breakfast with someone on the other extreme on the country, you have all your fellow citizens for neighbours.  The far reaching effects of the Hyperloop can be staggering, influencing the world in an irreversible way.

Critics will be quick to point out that the Hyperloop may never succeed in its intended consequences owing to its ultra high cost, which will be passed on to commuters. But here’s a surprise – the Hyperloop may be free to passengers! According to CEO Ahlborn, the company is considering other ways to make money to take load off passengers. The entire system will run on generated renewable energy, and they may even have enough to feed back to utilities for cash.

As for the initial set up costs themselves – they aren’t too much. In fact, the world has seen more expensive projects. As claimed by HTT, the costs involved in developing the Hyperloop will supposedly be lower than high-speed rail costs. Musk estimates that a stretch of Hyperloop connecting Los Angeles with San Francisco would cost between $6 billion and $10 billion which is a mere fraction of the $60 billion-plus budget set aside for California’s planned high-speed rail. Similarly, HTT says it could build such a stretch in a period of 10 years and it would cost about $16 billion. The reason behind reduced expenditure can be rooted to the design template which involves no rail tracks and hence cuts down on the land acquisition costs too. Musk and his team also use this logic to maintain the argument that Hyperloop will not be affected by natural disasters like earthquakes and weather conditions. These claims do sound fancy, but as much as they would profess, it would take a lot more to overcome the public’s skepticism and doubt of its safety and durability.

Despite the tiny technical, fiscal and social challenges it faces, the brains behind this technology claim that the Hyperloop will be widely accepted. Ahlborn said early this year,‘’ We will finish the five-mile California stretch in early 2017 and spend at least a year optimizing the system before taking on passengers.” If the technology is a success in the USA, we might even expect Hyperloop to mark the transportation industry in other countries like Singapore, UAE among many others.
Almost all of us are desperately waiting for the Hyperloop. Let’s hope it makes it to the curtain raiser before the kerfuffle about its existence on paper dies away!