A Noob’s Guide To Antimatter

WeThe Universe was once, what you could call, a frothing cauldron. With amorphous sizzling gases that were awaiting a little nudge from out of nowhere to break out. Unexpectedly, the Big Bang ensued. While we don’t know for sure how it occurred, the universe burst into an existence made of matter. Some of the ingredients include sub-atomic particles. Such as electrons, protons, mesons etc. Every part of the observable universe, according to scientists, consists of matter (and energy, of course). But is there a part of this expansive canvass that is not matter in nature? Science aficionados seem to give a vigorous nod for this hypothetical ‘underworld’. These mysterious particles, collectively called ‘antimatter’, have been puzzling scientists in a decades-long game of hide-and-seek.

As the term implies, antimatter is the polar opposite of ordinary matter that encompasses us. It retains the fundamental features – that of mass and charge, except for sign/polarity. In other words, the mass remains the same for both particles, but the sign of the charge and spin of an antiparticle is reversed. In light of this, all particles have a divergent yet identical twin. Thus, the antimatter equivalent of an electron is a positron (an electron carrying a positive charge). We represent any constituent of antimatter by a bar atop its corresponding matter symbol.

Also read: 50 Billion Neutrinos Are Passing Through Your Body Every Second

Easily one of the most mindboggling discoveries of the 20th century, antimatter was the brainchild of British physicist Paul Dirac. Dirac set out to formulate an equation linking visibly disparate laws of quantum theory and Einstein’s special theory of relativity. He found that his equation yielded the same result for electrons with positive charge as with negative charge. This led him to postulate that if there is an electron with a negative charge, then, there must exist an electron with positive charge. He argued that this was similar to the confluence of protons, neutrons and electrons to form atoms and matter. Their corresponding antiparticles would combine to form antiatoms and antimatter.

What sets apart antimatter in the innumerable blind spots in science are the speculations surrounding its absence. Unlike other discoveries, scientists haven’t scuttled from shaky ground due to the enigma that surrounds it. Matter & antimatter, being polar opposites, annihilate each other in a spectacular release of energy when they come in contact.

After the Big Bang, matter and antimatter are thought to have interacted and fiercely annihilated each other, leaving behind a universe dominated by matter. Annihilation of both particles only confirms that matter and antimatter is of the same constituents. By annihilation, we don’t mean that the particles vanish into thin air; They end up emitting gamma rays (γ), high-energy electromagnetic radiations. This process is called Baryogenesis.

The perennial unsolved mystery in science is that if antimatter and matter were present in equal quantities, why did only matter pervade the universe? Had they annihilated each other completely, in principle, the universe as we know it wouldn’t exist. If you’ll look around, you’ll notice this isn’t the case. Physicists have hypothesized the presence of one extra matter particle for every matter-antimatter pair, effectively tipping the balance. Simply put, a slight excess of matter could be behind this apparent imbalance in the ratio. Yet, scientists haven’t zeroed in on the exact mechanism that underlies this asymmetry. Research to explain this asymmetry is afoot.

So we know there’s a spectacular release of energy that ensues when the two interact. No surprises then, that there’s been increasing interest geared more towards adding antimatter to our military arsenal. A gram is capable of producing an explosion equivalent to 3 atomic bombs dropped at Hiroshima. However, physicists have managed only to recreate an infinitesimal amount of antimatter. Funnily enough, if all the anti-matter ever made by human beings were to be annihilated, the energy yield would be extremely insignificant. Only enough power a light bulb for a few minutes, a team of scientists at CERN has explained.

Antimatter could also work as a potential alternative to spacecraft fuel. You’d require only a tiny amount to achieve viable propulsion. But the possibilities are stunted by an acute shortage of antimatter available. In medicine, positrons work as a stable apparatus for PET scans. On the other hand antiprotons seem to possess some potential in treating and curing cancer and brain tumours. 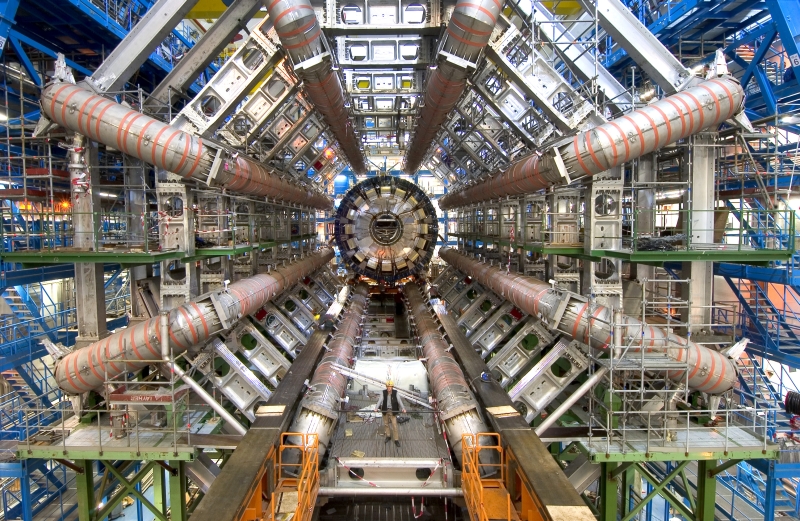 A belief widely held in the science community is that antimattter was indeed rife right after the big bang. Equal amounts of both matter and antimatter are thought to have spanned the universe. This not being the case now, scientists are working on to finding its sources closer to earth, considering their marketable applications. Hitherto, showers of antimatter begotten in the form of cosmic rays (energetic particles from space), traces of their production above thunderstorms and miniscule deposits in bananas (they contain potassium-40, which upon decaying ejects a positron) are some of the exhaustible sources of antimatter.

Since antimatter is difficult to spot and appraised in nature, it is produced in stimulated settings such as particle accelerators in laboratories such as CERN. In these high octane machines, particles are accelerated to high speeds and then made to collide with each other. However, antimatter manages to exist only for brief minutes. In order to allow for possible research, physicists have developed Penning Traps. In a Penning Trap, antimatter gyrates around with electric and magnetic fields, and to prevent it colliding with surrounding walls. Because collision = annihilation.

Opposed to particle accelerators, physicists have also developed particle decelerators to slow antiprotons and observe their behavior. The Alpha Magnetic Spectrometer (AMS) perched atop the International Space Station accommodates magnetic fields that bend the ray of cosmic particles to sieve matter from antimatter.

The study of gravity’s effect on antimatter is ongoing. Experiments like AEGIS, ALPHA and GBAR trap antimatter or slow it down by cooling it to temperatures near zero. This had led to the discovery of a whole new tribe of particles called the Majorana particles. In the Majorana class, particles are their own antiparticles. Neutrinos are speculated to be Majorana particles. Once again, the scientists haven’t reached a firm standing in this hypothesis. Further research would only help confirm this asymmetry. Majorana neutrinos are either light or dense. The speculation is that the dense particles would have existed only right after the Big Bang. This means these heavy ones would have decayed asymmetrically, giving a residue allowing for the universe to exist.

Given that we don’t know an awful lot about our universe, it is rather presumptuous to posit asymmetry in the skewed matter-antimatter ratio we see around us. If made available in copious amounts, antimatter is capable of catalysing both monumental growth in scientific fronts, and unleashing military dynamites.

Given our history with such technology, all possibilities are likely.