How Humans Could Evolve to Live in Space

Humans have always been on a never ending quest to explore distant cosmic shores for potential life and habitat. In this pursuit, the space industry has witnessed humongous growth over the past three decades. The rise of private rocket company called SpaceX, a recent emergence of another by the Amazon founder called Blue Origin, a private organization set to land the first humans on Mars called Mars One, and the ground-breaking research of organizations like NASA and ISRO – all of which are relentlessly pursuing the idea of expanding our reach beyond the realms of our home planet Earth.

In this pursuit, why should our imagination lag behind? An up-rise of space genre films and books in the recent years has tinkered in our minds the unprecedented imagination of a future where the distant cosmic shores will appear as plausible habitat. While Christopher Nolan’s sci-fi film ‘Interstellar‘ and Andy Weir’s science fiction novel ‘The Martian’ envision an audacious space expedition and have reinvigorated the ethos for space travel, few of us do a reality check of our species’ fragile condition, which is woefully unprepared for long duration journeys into space. 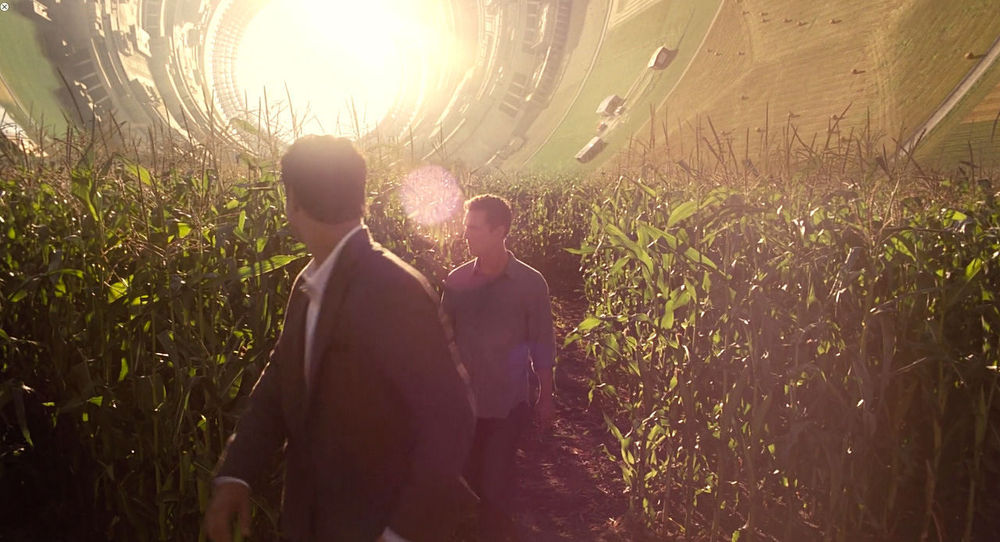 In the sci-fi movie Interstellar, humans leave Earth and establish a space colony on Cooper Station which revolves around Saturn

If we hope to leave Earth one day and explore the cosmos, our bodies are going to have to get a lot better at surviving its harsh conditions. Evolution of the human species for survival in space is an ongoing speculation among scientists, researchers and thought leaders. The hypothesis has diverged in two potential prospects.

Back in mankind’s early days, nature vs nurture played its role in the evolution of species on Earth. Life originated in the oceans in the form of a single celled organism. It continued to grow in complexity in response to its surrounding stimulus. Homo-sapiens emerged as nature’s most complex creation, and as our primitive ancestors moved around the planet, they diversified.

The Mars Research Desert Station (MDRS) is a project of the Mars Society. The Mars Society’s lofty goal is to explore and settle the planet Mars, through grounded means by living in a Mars like simulation.

But as humans begin to explore beyond the reaches of Earth, they will experience a far more extreme diversification than what they experienced on Earth. Being able to walk around on the Moon or Mars is a future inevitably approaching. And this will have consequences for the human race. Travelling to space will gradually affect the biological make of our kind, morphing humans into a separate species. Moreover, a psychological change will occur, where people living billions of miles from Earth will start feeling like a completely disparate group than their Earth counterparts. Of course, this is likely to happen over very large time scales.

A new species that emerges will possess a genome structure reshaped from environmental conditions in space. New radiation environments, gas composition where people will breathe, and gravity field exposures.

Colonies on Mars will experience the Martian gravity which is about a third of Earth’s. A primary physiological change would be humans needing much less strength on Mars. So we could witness the rise of a generation of people with smaller builds and less muscle mass.

Given the limitations of our man-made machines, synthetic biology will be a means for us to engineer not only food, fuel and environment, but also ourselves to compensate for our physical inadequacies for survival in space.

Let’s take an example of how synthetic biology can be used for space exploration.

The Martian soil composition is similar to that of Hawaiin volcanic ash with trace amounts of organic material. The average temperature on Mars is -60 degree centigrade. Most of the water that forms on the surface is in the form of frost, which evaporates quickly. To be able to grow food in an environment this harsh would require us to release trillions of gallons of atmospheric gasses on Mars. And of course, the construction a giant glass dome to contain it all, which is all certainly unrealistic.

An alternative to this is growing bio-engineered plants called ‘Genetically modified organisms (GMOs)’. GMOs have been created by borrowing genetic traits from different plants and intermingling them to create a plant. This new plant can have the desired survival characteristics, like drought and cold resistance. GMOs can further be engineered to make medicine or fuel.

But what about the human body? Can we engineer ourselves to survive in the Martian environment? Evolved uniquely for Earth, we are likely to experience health problems. There’s excessive radiation exposure on Mars, coupled with a practically non-existent atmosphere.

After successfully creating genetically modified plants, researchers are currently working on synthetic biology to ensure human survival in space. This involves borrowing genetic information from a subset of organisms known as extremophiles, which are known to survive in extreme living conditions. A particular one called Deinococcus Radiodurans is known to withstand cold, dehydration, vacuum, acid and most notably, radiation – most of which appears as the genetic modification we would require on another isolated planet. Adapting the relevant genes to mammals will allow us to overcome our biological limitations, and open up new frontiers for manned missions in space.

Also Read: A Step by Step Guide To Planet Colonization

The Future of Human Evolution

As renowned biologist E.O Wilson said, we are living in the age of Gene Circumvention, where we remedy our genetic defects with temporary external supplements. As a species, we evolved over thousands of years and are still evolving via genetic mutations so minuscule that we are unable to observe everyday, or on even longer scales. With the accretion of scientific prowess in genetic studies, we are approaching the age of volitional evolution – a time during which we as a species will have the capacity to decide our own genetic destiny.

The idea of engineering another form of humans invite its own share of skepticism, is not without its moral and ethical quandaries. By doing so, are we besmirching humanity? Such perplexities are still up for debate. But the big take-away  from this marvellous scientific achievement is how much science is able to afford us. Question is, is humanity ready to take that leap?