How We Will Colonize Mars

Exploration is embedded in our very DNA. We venture out into unresolved scientific territories, to demystify mysteries, and to open our minds to unimaginable realities. But most of all, we do it because we crave exploration. We always have!

About 200,000 years ago, the first modern humans originated in Africa. Before long, they began venturing into unchartered lands beyond their origin, to satisfy curiosity and ensure further survival. This marked the beginning of man’s evolution, paving the way for developed civilizations on Earth. But the Earth was never enough. Our ancestors gazed into the skies in awe, wondering what lied beyond the vast expanse of the skies. This curiosity was satisfied when Galileo first observed space through his telescope. Ever since then, we have been gazing into space to find our place in the cosmos.

Looking back at our anthropological history, studies indicate that every human civilization came with an expiration date. But long before, when the Earth was inhabited by dinosaurs, a single cosmic event was enough to wipe off an entire species from the face of Earth. There are real threats to the survival of the human race on Earth. Some of them are our failure to save the home planet from ecological destruction. Another – the possibility of nuclear war. Collision with a single appropriately massive asteroid could eliminate most life. Eventually (where eventually is 3.5 billion years) our own Sun will enlarge in size and destroy Earth. Long before that happens, we must become a spacefaring species, capable of living not only on another planet but ultimately in other solar systems.

Also Read: A Step by Step Guide To Planet Colonization

Our immediate neighbor ‘Mars’ has sparked our interest in this respect. We’d certainly not eye Venus due to the close proximity to sun and the extreme hostile living conditions that persist on this hot planet. But speaking of Mars, we’ve observed quite a few similarities with our home planet, and it seems like a viable alternative to explore. Especially after SpaceX has declared to put humans on Mars by 2025.

What shall life on Mars look like? Let’s paint a little picture, shall we?

How we’ll live on Mars

After 10 months of ceaseless space travel, SpaceX’s Dragon capsule blasts into Mars’ thin atmosphere. A crew of five sits in anticipation as the spacecraft nears the surface and the blast effect of braking rockets kicks up red dust. As Raptor 1 settles down near the Martian equator, the astronauts have to think ahead of time. The Raptor 2 would be there in a couple of hours. Their immediate to-do list comprises of deploying a basic habitation camp – inflating pressurized tents which will act as their living area and act as greenhouses in which to grow food. 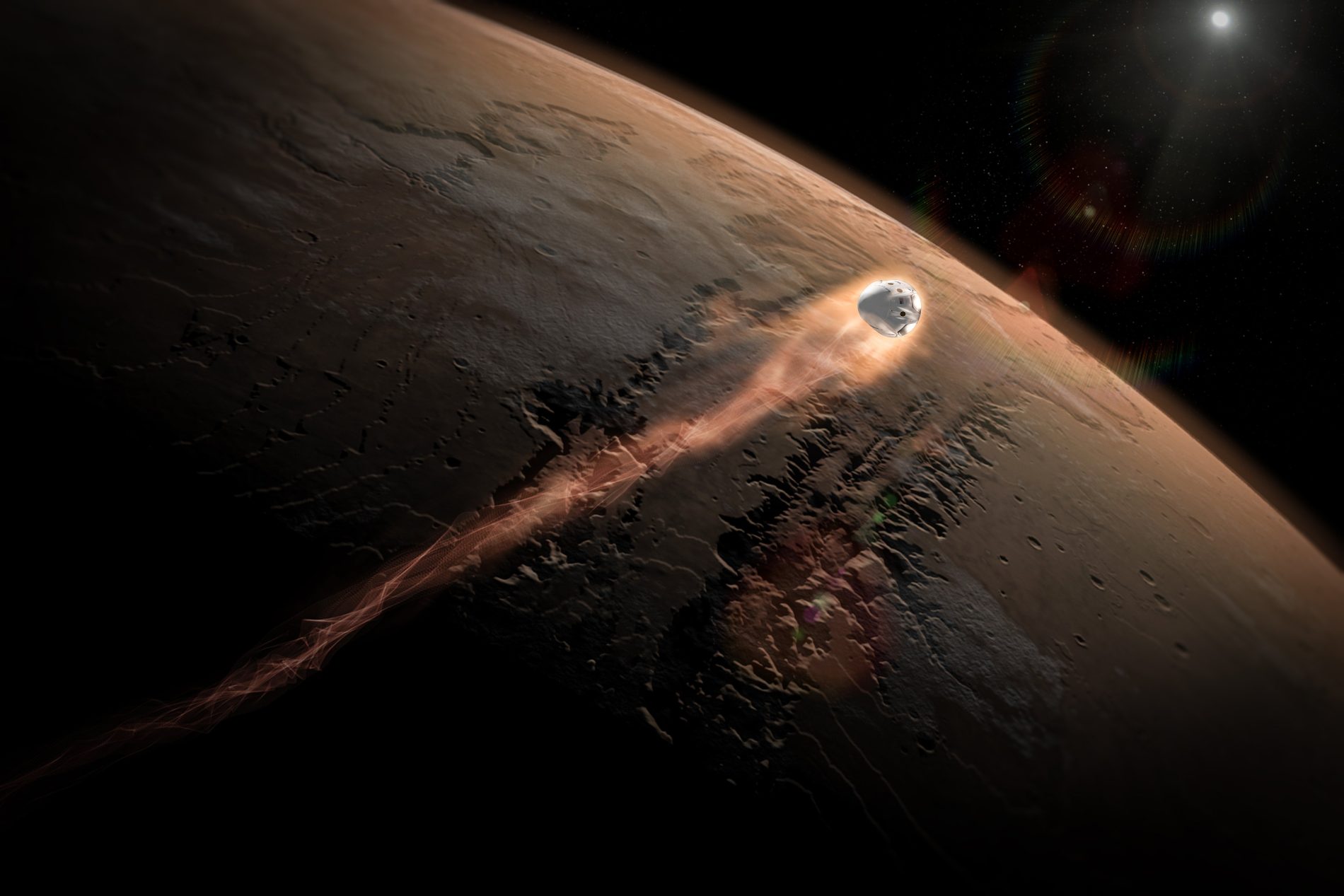 An illustration prepared for Mars One, a Dutch nonprofit group raising funds for a landing in the 2020s, shows how a large colony on the planet might look.

The next Mars mission will take place 2 years from now during the Hoffman launch window – when Earth and Mars are the closest to each other. Long before they arrive, these astronauts must build more permanent structures. Possibly out of bricks they make from the Martian soil – regolith. But first, their primary task is to find water.

They must start by determining if the previously sent NASA landers and orbiters predicted enough water in the surface soil. This, to support their hydration needs as well as serve as a stock for making more of the oxygen they will consume. They will form habitats in a crater that a NASA orbiter spotted as having a smooth sheet of pure water ice. If that’s not ice, they need to begin a hunt of an area with high percentage of ice in the regolith. If that sort of ice cannot be found nearby, there’s a third option – deployment of ground-penetrating radar to find underground water, and then drill.

Mars and Earth are similar in many respects. The Martian terrain bears resemblance to certain parts of Earth—the dry valleys in Antarctica or the high deserts on Hawaiian volcanoes. However, the two planet also have some stark differences. The following info-graphic illustrates these differences.

An infographic illustrating differences between Earth and Mars. Courtesy: TED

A day on Mars is only 39 minutes and 25 seconds longer than a day on Earth. But a Martian year is far longer than one on Earth—687 days—making seasons twice as long. Mars witnesses severe seasonal variations between summer and winter, due to an oval orbit. As a result, the Martian settlers will have to establish two bases. One below the equator in the southern hemisphere for summers and one north of the equator for winters. Landing near the equator allows the astronauts to take advantage of milder temperatures (touching 70 degrees Fahrenheit) on summer days. But at night, the temperature can plunge to as low as minus 100 degrees. Thus the structures will need to insulate the astronauts from the cold as well as to protect them from solar rays that are almost unrestricted by the thin atmosphere.

These plans generate justifable skepticism. There are multiple scenarios involving failure. The landers may not find a decent water supply, the radiation effects are more severe than predicted. One or more of the spacecrafts could face fatal damage on landing. Travelling to a seemingly lifeless planet as much as 250 million miles away from home is giant leap of faith in science we’ll be taking. Think back to the moment Neil Armstrong stepped on the moon, when the Earth stood still. A collective global inspiration emerged – if we could get to the moon, we could do anything.

Getting to Mars though, will have an entirely different meaning: If we can get to Mars, we can go anywhere in the solar system. The moons of Saturn and Jupiter will seem like reasonable places to explore.

Related: Can we colonize Titan?

In reality, it is not as simple as depicted on paper. Our extremely ambitious plan not only involves visiting Mars and establishing a settlement, but infact terraforming the planet. To make its thin atmosphere of carbon dioxide breathable for humans. To alter average temperatures from an average of –81 degrees Fahrenheit, to a more tolerable 20 degrees, melting frozen water and filling its dry stream beds and empty lakes with water again. And to bio-engineer plant foliage that can flourish in its temperate zone on a diet rich in CO2.

But if all goes as planned, these first explorers alone on a lifeless planet will represent the greatest achievement of human intelligence. This moment will be more significant in terms of technology, philosophy, history, and exploration than any that have occurred before it, all because we will no longer be a single-planet species. It will expand our vision beyond the bounds of Earth’s gravity. But most importantly, these first explorers will become our greatest hope of survival.