Tesla’s Gigafactory Will Change How The World Consumes Energy

Elon Musk doesn’t need an introduction. But we’re going to give him one anyway. Probably because we never get tired of describing him. One of the greatest minds in the world right now, Musk is known for his enormous innovations in the field of electrically powered vehicles in Tesla Motors and his work in SpaceX. He’s probably the most celebrated entrepreneur in the world right now.

Musk believes the future of the global automobile industry (and planet Earth) rests in electric vehicles. The era of Internal Combustion Engines should start its downhill phase, to be taken over by these EVs. The problem with EVs however, is that they need high-powered, highly efficient batteries. While Tesla has been a dramatic success as a company, it still pales in comparison to other major automotive companies if you look at sales and volume. Tesla is still shipping cars in the range of 5 digits.

To accelerate this (and therefore change the world), you need more batteries. Problem is, battery production in the world simply isn’t high enough. So what did Musk decide to do? He’s building a battery factory himself. Unsurprisingly, it has the slick name – the Gigafactory.

What exactly is the Gigafactory?

Gigafactory is essentially a Lithium-ion battery factory whose primary aim is large scale production of batteries that Tesla Motors so badly needs. Tesla wants to expand to the mass market, targeting 500,000 car sales by 2020. To achieve this, the Gigafactory is indispensable.

The Gigafactory is situated in Nevada, USA and according to the information provided by the company, it’ll be a diamond shaped construction. Musk’s concern for the environment is visible here too – there’s going to be minimal soil extraction at the site to prevent environmental damage.

Why the name Gigafactory though? Well, ‘giga’ meants giant. And that’s quite an accurate description. Once complete, the factory is expected to produce a whopping 50 billion WattHours (50 GWh) of energy in batteries annually. To put things in perspective, that’s the current production of all Li-ion battery factories in the world, put together. This means the Gigafactory alone will double the world’s battery production.

If that’s not cool enough, let’s take a look at some more slick attributes on the factory.

Related: The Rise & Rise of SolarCity

The Gigafactory Will be Energy Neutral

What’s cooler than producing 50 GWh of batteries?
Producing them for free.

The Gigafactory is designed with solar panels placed all over on the roof of the building. With 20 percent efficient solar panels under five peak hours of sun light, the Gigafactory’s rooftops will generate 850 MWh of solar power. This energy output will be used to run the factory along with other renewable energy sources. Here’s a snap of the factory construction in progress. 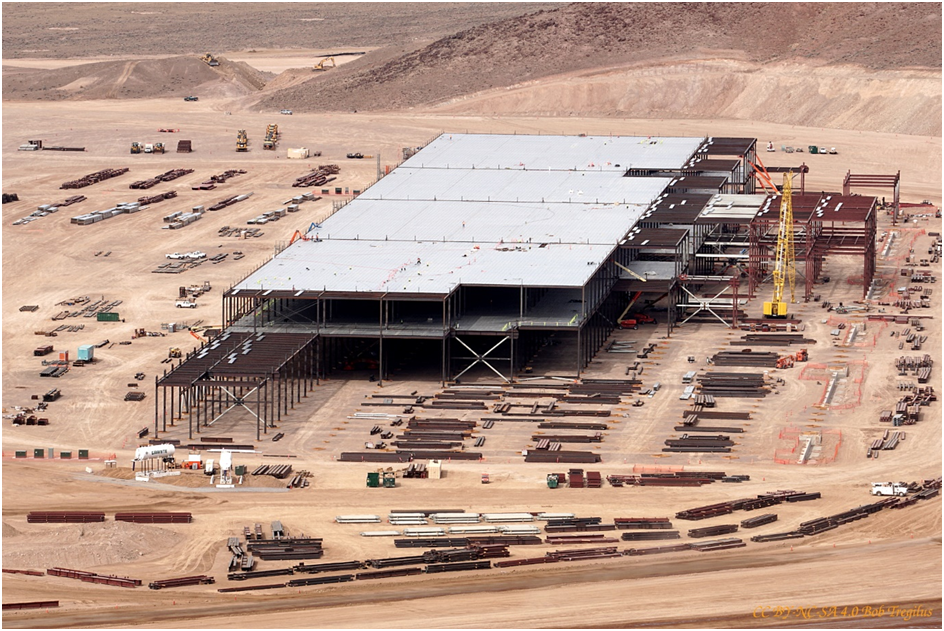 Tesla is also relying on other renewable sources of energy to power the factory. Like wind. With wind turbines installed, the factory can produce or generate 1836 MWh of wind power.

There’s also reliance on geothermal energy. The Gigafactory will have a few geothermal energy plants at its disposal. Apparently, the site chosen for the factory happens to be among one of the world’s top sites, being an extremely high source of geothermal energy. Musk clearly does a thorough job. Nevada was chosen as the location after a lot of contemplation. With 20 KW capacity the plant is believed to generate 480 MWh of geothermal electricity or its energy equivalent.

So together, the plant is expected to generate almost 2900 MWh of renewable energy – more than 20% of its expected consumption. So not only will the Gigafactory run on pure, clean energy – it may even feed energy back to the grid. The energy produced will of course, be fed into its batteries.

With such heavy dependence on renewables, carbon emissions will be minimal. It’s a clear indication of Tesla’s seriousness about going all the way with renewable electricity to save the environment. Effect on world’s energy supply and consumption

The Math behind the Gigafactory

The primary source the Gigafactory is relying on is lithium, for the batteries. The world fortunately, has plenty of lithium which when tripled from current production should last up to 135 years. The worldwide production of lithium was 36,000 metric tons of lithium in 2014. Tesla shouldn’t have any issues in lithium supplies. What’s bothering investors at Tesla, is the investment the factory needs.

The Gigafactory is expected to cost Tesla in the range of $2-5 billion dollars. That’s a lot of money. And the factory is still some time away from completion – Tesla doesn’t expect it to be 100% operational until 2020, although it is likely to achieve that scale by early 2017. But Musk is convinced this is the way forward if Tesla is to meet its target of 500,000 units in sales by 2017. In fact, Tesla believes that the Gigafactory’s raw material requirements would be so high – it’d drive down lithium prices down by 30%. Tesla’s investors shouldn’t complain.

It’s going to be hard to quantify the impact the Gigafactory will have on the world’s energy supply. But there’s no debate on the fact that it’ll be overwhelming. This factory is expected to consume 100 megawatts (MW) of power at peak capacity – which works out to 2,400 MWH per day. This is the equivalent of about 80,000 households. Such numbers for a single factory are staggering. By putting out up to 50 GWh annually, Tesla will be taking an equal amount of energy (in emissions) off the road, and therefore off the face of the Earth.

Aside from being overwhelmed at the humongous scale at which Tesla is operating, one can’t help be appreciate the positive and noble intentions Musk’s company works with.

The Gigafactory is going to have a very visible impact on the way our planet consumes energy. And it’s going to happen very soon.