Antarctica has long remained an isolated continent. Textbooks in school don’t tell us much about it, and only a few careers involve anything to do with Antarctica. For a long time, it has conjured only one visualisation to us – plain white. Plain white is not far away from the truth. Antarctica has always a mystery to humankind. The continent is pure, both metaphorically and figuratively. There is much more to Antarctica than ice and water. In fact, the continent holds some valuable lessons for humanity – lessons that’d go a long way in ensuring our future, both on Earth & among the stars.

What was Antarctica before?

Antarctica wasn’t discovered until the nineteenth century. This isn’t surprising. We didn’t begin launching satellites until the late 1960s, and it was pretty hard for ships go all the way down south. Nevertheless, there were beliefs about a ‘Terra Australis’ right from 1st century AD – as a vast continent in the far southern corners of planet Earth, that equalizes the northern lands. 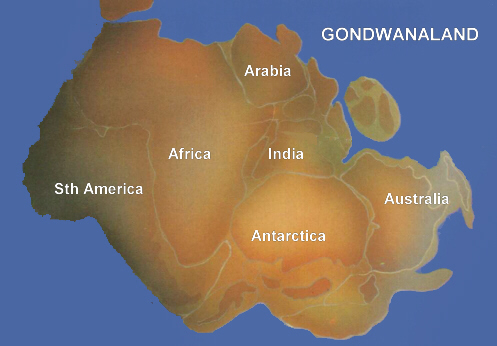 Antarctica wasn’t always like this. Long before (around 170 million years ago) it was a part of the supermassive Gondwana continent. Eventually it split from the ancient supercontinent and Antarctica, as we know it formed 25 million years ago. The climate too was not the same before, many historical events suggest that once, even Antarctica experienced tropical climate. Ancient lifeforms also inhabited Antarctica. The continent split and moved further south. With the decline in Carbon dioxide levels, the temperatures dropped and ice slowly covered the vast forests of Antarctica. It soon became the Antarctica as we know it today.

With time, humans understood that Terra Australis was not Australia. We further estimated that the mass of the southern corner was a lot more than expected. We were right.

This fifth largest continent is a desert and receives a typical precipitation of 20cm along the coastline. Antarctica houses the geographic South Pole and spans at 14 million square kilometers. The mean annual temperature of the mainland is -57°C while the coastline of Antarctica is slightly warmer. -89.2°C – the lowest ever temperature recorded on planet Earth – was recorded here at Vostok station, Antarctica. Antarctica is colder than the Arctic, because the Arctic Ocean is warmer and Antarctica has a higher elevation. A sheet of ice covers over 98% of Antarctica’s surface. This sheet averages a thickness of over 1.6 km. This is the windiest continent on planet Earth. Much to everyone’s surprise, it also houses the southernmost active volcano – Mount Erebus on Ross Island. The more we study about Antarctica, the more we can find out about our planet and our solar system (meteors). Antarctica is truly a gem.

Geologically, this piece of land should be a challenge to survive, let alone live in this continent. The climatic conditions allow for a few animals including penguins and seals. Majority of the lifeforms are microbial including Algae and Bacteria. Even if we move into Antarctica, it would be very difficult to setup a proper colony for the conditions are unforgiving. The transportation costs of the material form the ‘mainland’ to Antarctica would be an accountant’s worst nightmare. Ice sheets in Antarctica make up over 70% of the world’s fresh water. This being a good thing is still bad. Any rise in temperatures can increase the sea level to up to 60m. Therefore, it is not practically feasible to set-up a permanent settlement in Antarctica. Antarctica is not very welcoming.

What can we learn from Antarctica?

Despite its aversion to visitors, and its near complete isolation over the past few centuries, this virtually uninhabitable land can teach us a lot.

Antarctica has no government. Therefore, there are no politics. Few countries have mutually recognized claims to few portions of the continent, while there is still no official recognition for these claims. Under the Antarctic Treaty System of 1959, no one can claim Antarctica further. During the Cold War, the first Arms Control Agreement came into effect. The Arms Control Agreement prohibits military activity in the entire region – similar to the Outer Space Treaty that keeps nuclear weapons outlawed in space. There are no military bases or fortifications. Most of all, there is no weapon testing here on Antarctica. Along with this, mining is also illegal (this is up for review in 2048).

Basically – at first glance, Antarctica is governed by many laws that most peace-loving folks would like implemented up north, in all of our continents. While expecting such a scenario is impractical, the continent’s governance (or the lack of it) is a beautiful example of how science prospers when political and military intervention is removed.

Thanks to its largely uninhabited area (and therefore lack of industrialisation), Antarctica has among the most clear skies on the entire planet. There’s very little toxicity, allowing most telescopes to peer into the depths of the universe without any hindrance. A complete ban on military activity also helps keep away all sorts of pollutants.

More importantly, the multiple working stations on the continent are a fine example of how science can work together for peace.

So far, we have been successful in maintaining and running a continent without governments and politics.With its harsh weather and isolated nature, Antarctica can serve as a model to learn from when we begin establishing colonies on other planets, such as Mars. Mars happens to be a similar place – colonists will depend on periodic supplies, will be cut off from civilisation, and will be undertaking glorious scientific research. There’s a lot to learn from this isolated region.

We are already moving a step closer in this direction. The International Flag of Planet Earth is a sign of our species’ slow progress to being a multi-planetary species. What’s funny though – is that Antarctica seems to be helping the effort as much as Elon Musk is himself.