An Extinction Every 26 million years: The Nemesis Theory

Besides youth, it is well-known that we humans are obsessed with defeating death. This was displayed in the way modern man obsessed over the Mayan prediction of apocalypse in 2012. We have a myriad of movies spinning around saving earth from destruction caused by space debris. Interestingly, predominant films have a happy ending reflecting people’s impeccable tendency, or rather drive, to circumvent the hurdle. But, this might not be the case in reality. Beware paranoid earthlings! A red dwarf-twin of sun called Nemesis may be lurking near our solar system, sporadically and unrelentingly causing destruction to life on earth.

Nemesis is a red dwarf star speculated to be a twin of sun. Emphasis on speculated.

The speculation was brought to fore to substantiate the perceived cycle of mass extinctions in Earth’s history. Christened as “Nemesis”, or “The Death Star”, it is believed to be several times the mass of Jupiter. Ironically, the theory wasn’t propounded by astronomers but by paleontologists. What makes this theory all the more nebulous is its murky orbit. To avoid affecting orbits of other planets and to be hidden from observation, Nemesis remains far away from the sun. It is believed Nemesis may be a red or white dwarf, which’ll explain why it’s been so difficult to spot. 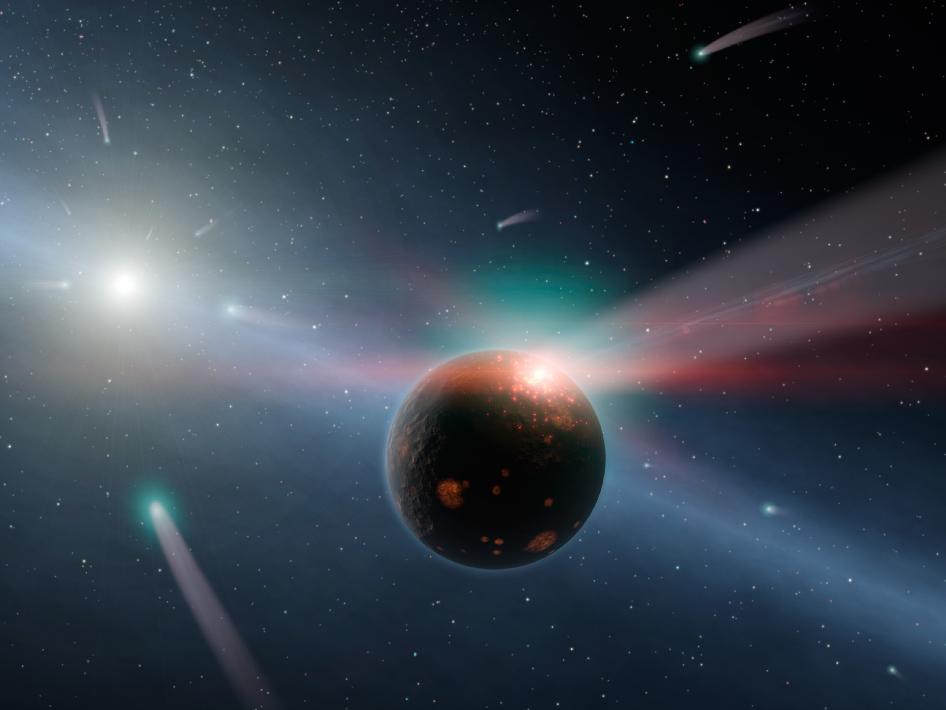 Scientists speculate that Nemesis brings about catastrophic ramifications by drastically affecting the Oort cloud blanketing the solar system. The Oort cloud is situated beyond Pluto, about half a light year away from the sun. It journeys around the sun in an elliptical path carrying a composition of icy rocks. Their ice commences to melt and ooze behind essentially giving them a semblance of comets. Every once in 25-30 millions years Nemesis knocks onto the outer regions of the same. So, when Nemesis nears the Oort cloud, comets may be unleashed, propelling them toward the inner solar system. This, results in mass extinctions here on planet Earth.

All the dinosaurs that were parading regally on earth were wiped off the surface due to an asteroid slamming onto to the planet 65 millions years ago. Around 35 million years ago, another meteorite struck killing all life. In addition to this, there is also a theory stating an extinction to have happened 251 million years ago. Realizing a loop like structure in these events, paleontologists David Raup and John Sepkoski, theorized the existence of the star that sentenced Earth to death every 26-30 million years, as noted earlier.

Astrophysicist Richard A. Muller infers that Nemesis is most likely to be found in the southern constellation of Hydra, the Water Serpent, about 1.5 light years away from us. He surmises that in the next few billion years Nemesis will be flung off the gravitational field of the solar system. Muller also expects Nemesis to be discovered once we further improve on our parallax surveying technology, which apparently are inadequate for this job as of now.

In 1781, the discovery of Uranus led researchers to speculate the presence of Planet X that is causing orbital variations in its pathway. Bids to track this mysterious Planet X engendered the discovery of Neptune and Pluto. But, both the planets couldn’t fully explain the orbital deviations. Astronomers suggest that these inconsistencies were caused by an undiscovered planet that exerted its own gravitational force. Word is that this infamous Planet X may be Nemesis.

Recently uncovered Sedna, a planet positioned in the trans-Neptunian orbit makes for a puzzling case as it has an unusual extra-long elliptical trail around the sun. One reason physicists put forth is a dimly lit star at the end of the solar system which it spins around. It is neither close enough to be affected by the sun not it is far enough to be influenced by other stars. This convincing argument has eventually led the scientists to reluctantly accept the presence of an alien celestial body liable for its uncanny orbit.

In most cases in the universe, two stars are enormous enough to carry out fusion and revolve around each other, having a common point of reference called the barycenter. This results in a binary star system. Chancing upon such gravitationally bound binary star systems is in not essentially an out-worldly possibility. These kinds of star systems revolve around the same center of mass. Almost, 50% of the universe is believed to be peppered with such star systems. On the other hand, there have also been claims made by researchers hypothesizing that Nemesis may be a black hole.

On the other hand, several researchers have also thrown shades at this theory. The search for Nemesis hasn’t been a victorious one. But, the study has been key to unveil around 3,525 stars and brown dwarfs. Advanced telescopes haven’t reported of such a star yet, making its presence debatable. Scanning the sky for it using avant garde telescopes like Two Micron All Sky Survey (2MASS) and Wide-field Infrared Survey Explorer (WISE) hasn’t yielded favourable results. None of them have concretely zeroed in on a body of mass to be designated as Nemesis.

Many scientists also chip in that such a wide orbit is unstable and could not have lasted long enough to trigger mass extinctions as seen in fossil records.

How the star influences the future

The hypothesized cyclical nature of mass extinctions is one of the contentious topics in the science community.  While the internet has been inundated with speculated of a Nemesis star that is penetrating the inner Solar System, there is an another party saying that it is somehow being kept under wraps tacitly by NASA.

According to Muller, this “Death-Star” is due to arrive thirteen million years from now. It might spare us. But, aren’t we on to Olympus suicidal missions like climate change and water crunch? One does not necessarily need Nemesis to destruct earth.

We may locate the dwarf star soon, but to know what would be its next course of action, we’re going to have to wait for 13 million years to pass. Of course, we’ll probably have moved on to other galaxies by then. So it won’t be an extinction event, technically.