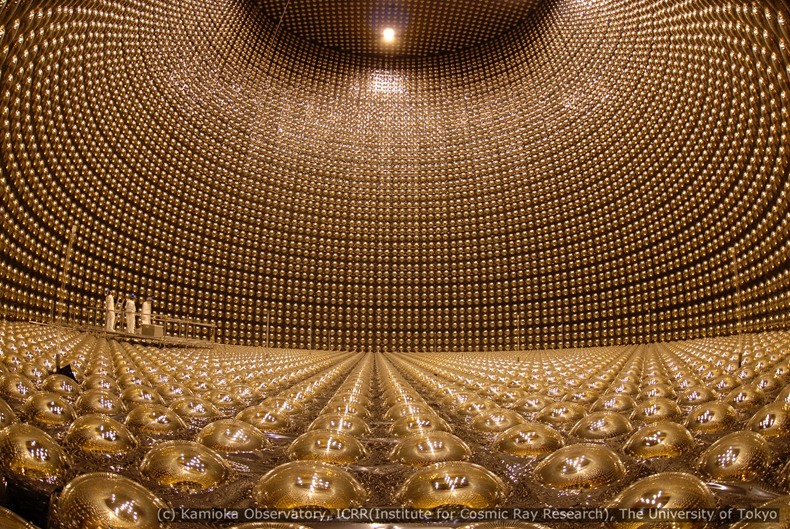 50 Billion Neutrinos Pass Through Your Body Every Second

There are fifty billion neutrinos passing through your body every second. Which means about 300 billion will have gone through you by the time you finish reading this sentence. What are neutrinos? And why must they go through you in the first place? Let’s delve deeper.

Neutrinos are subatomic particles. They have near-zero (but not zero) mass – allowing them to travel at nearly the speed of light. With no inherent charge on them, they’re basically neutral particles just zipping through space, racing with photons. Neutrinos actually ‘little neutral particles’.

But why must they pass through you? Or anyone else? Photons hit solid objects and come to a halt. What makes neutrinos unstoppable? The answer lies in understanding the fundamental forces of the universe. There are four of them – Gravity, Electromagnetism, the Strong Nuclear Force and Weak Nuclear Force. Neutrinos are invisible to the first three forces, and are only affected by weak sub-atomic forces. Since they don’t interact via any of these other forces, it allows them to pass through other objects (like the world around us) unscathed. A large number of neutrinos pass through everything on the planet and still travel unhindered because of this property.

Where do Neutrinos come from?

Neutrinos are formed in different ways: Solar neutrinos are formed by all the fusion reactions taking place in the core of our Sun. The Sun produces an enormous number of neutrinos. In the order of 1038 neutrinos per second.. A fraction of that – 50 billion, get to pass through your body every second. The Sun is where they’re all coming from.

Neutrinos are also formed in neutron decay, beta decay, also during certain other decay processes and are formed during certain radioactive reactions.

Neutrinos were discovered indirectly. According to the laws of conservation of mass and energy should be conserved in all reactions. But there were some discrepancies found in certain reactions. It was later found that the excess energy was carried by neutrinos. Interestingly it was the antineutrino that was discovered first using two targets containing solutions of cadmium chloride and water. Each type of neutrino has a corresponding antineutrino. It took almost 25 years to discover these particles after the initial theorization, and this closed a much hyped chapter in physics.

Today there are various methods of detecting these ghost particles(neutrinos). The Super Kamiokande however, requires special mention. The Kamiokhande observatory is built about 1000 metres below the surface to isolate it from cosmic radiation. This observatory carries 50000 tonnes of water in a stainless steel tank surrounded by photo multiplier tubes. During a neutrino interaction, the Chekhov radiation is produced (the equivalent of a sonic boom).

Why care about Neutrinos?

Why bother ourselves with neutrinos, though? These things aren’t interacting with most of matter anyway. Well, quoting Hooper – “They’re important to our understanding of the kind of processes that go on in the sun, and also an important building block for the blueprint of nature.” The potential of these neutrinos are only partially known. During the Big Bang process almost the all matter and antimatter annihilated but the balance tipped towards matter and we live in this universe as we know it today. It is suspected that neutrinos played a major role in this eventual imbalance of the universe. Here are two fun facts on Neutrinos:

– Neutrinos are speculated to be about 4 million times lighter than the next lightest particle-the electron. And that too it is the upper limit. Electron neutrinos are the lightest and the muon and tau are heavier versions that decay rapidly. The exact weight has not yet been calculated.

– If there was a solid lead block of one light year length then only less than half the neutrinos projected at it would interact.

These are just a few facts about the tiniest particles that has been discovered but seem to be the one that has been responsible for everything as we know it today. Well till we know about how the universe came into being, we can only speculate about the role of these ghost particles.